by hta. org in HTA, interview

The Hungarian Tire Association (HTA) was established in 2011 with the participation of seven international tire manufacturing companies with production capacity or representation in Hungary. In our interview series, we talk to the heads of the member companies.*

Mr .Vilmos Tokaji, the Head of Sales Southeast Europe at Continental Tires, certainly has his hands full in a multi-changing, difficult-to-plan market environment, while also nurturing a vision about what they would like to achieve by 2050. We discussed with him the availability of carbon black, the increasing size of tires and the second life of PET bottles. 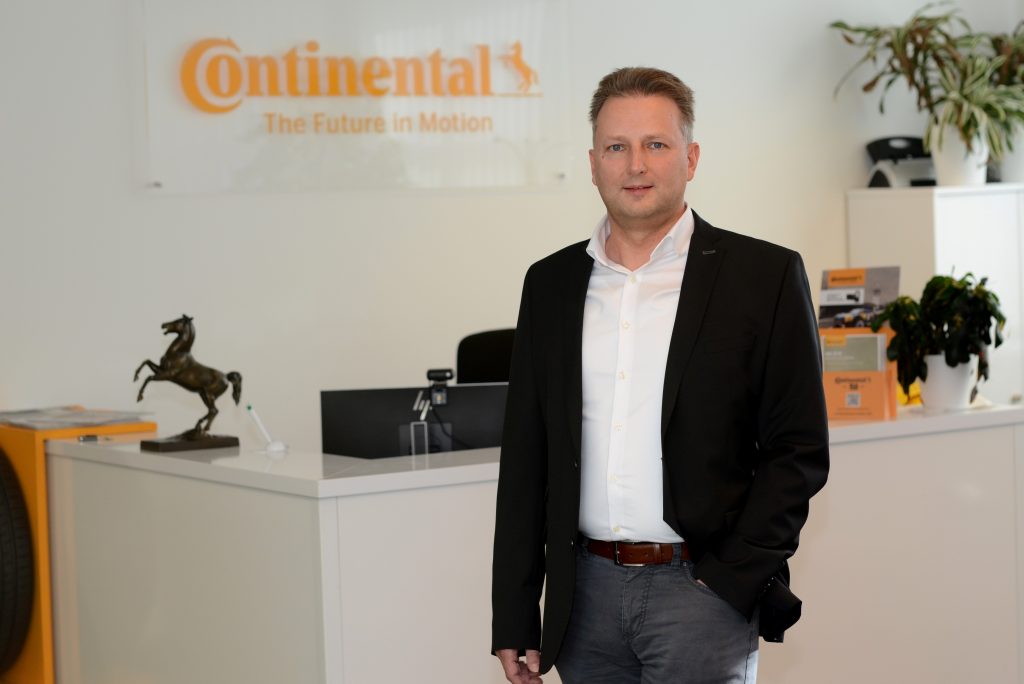 According to the news at the beginning of the year, the economy was growing steadily, consumers were starting to make up for their previously postponed purchases, and demand for tires was growing sharply. Then the war broke out next door, and everything had to be rethought. How is the changed situation affecting your company? I believe the exposure of Continental Group is mild, but I assume that as a global company, it all makes planning difficult.

In accordance with our general principles, we do not comment on political issues. We are following the war against Ukraine with great concern. Our thoughts are with those involved and we hope that the war situation will end as soon as possible. As a company, we firmly believe that conflicts can only be resolved through diplomacy. Military action only results in one thing: enormous human suffering. What happens not far from us affects all players in the industry, including us. Our exposure is not dramatic in that the European market has not generally been supplied from the Russian plant – which, after the previous shutdown, is now producing again at a significantly reduced capacity, exclusively for the local market. The resumption of production at our Kaluga plant is not based on economic goals, but on the safety and protection of our local employees. I would like to distinguish between the short-term and medium-term effects of the war crisis. The former is significant in that for certain raw materials; European tire production has had a high exposure to countries currently at war. In the case of carbon black and synthetic rubber, the main priority in recent weeks has been to find alternative sources of supply in order to maintain the continuity of production as much as possible.

Were your efforts successful?

Yes, it seems so. The supply of raw materials is not smooth, but it is running. In addition to rising energy and transportation costs and other factors, prices will be significantly affected by the lack of a source for Russian raw materials. For the time being, we have only estimates of the extent to which regional and Hungarian demand will be affected by the changed environment, and this I think goes for everyone else in the industry. One thing is certain: the desire for mobility is strong. Experience has shown that the car is not among the first things to be shelved if a family has to rethink its budget due to, for example, rising inflation. Significant shocks in demand are not expected, but shocks in supply will probably make our lives more difficult.

So the supply will be short?

Yes, as I mentioned, there is more uncertainty in the supply chain, which makes production planning difficult. In the automotive industry we have been observing supply-constraining effects originating from raw material shortages and supply chains for 1.5-2 years, and it has now reached the tire industry as well.

Then this could also mean that prices can be raised freely?

We have already been forced to take steps, but the competition in the tire market is extremely strong. It is still difficult to say who will be able to pass on the increased costs to their customers and to what extent. What is certain at the moment is that there is a lot of pressure on us from the cost side.

Let’s talk about demand! What are the main trends? Are customers really looking for larger and larger tires?

Yes, tire sizes are changing and this trend stems from car manufacturing as cars rolling off production lines have increasingly bigger wheels. This process has been going on for a long time and has accelerated in the last year or two, as due to the lack of semiconductors, automakers are concentrating their temporarily reduced capacity on their most profitable models. This means that the proportion of large, more expensive cars with larger wheels has increased in sales, with a consequent increase in demand for larger tires. And to have another twist in the story, not only is the change in size important, but the complexity of the changing demand is far more significant than before. We have to keep a lot more sizes on stock, we work with significantly more articles than, for example, 5 years ago. The impact on the tire industry will be that competitiveness can even be affected decisively by the quality of the supply chain. It is a growing challenge to bring an ever-widening range of tires to our markets.

What steps do you plan to take?

We’ve already taken some. We have invested in our supply chain in recent years and this year we opened a new distribution center with nearly 57.000 m2 capacity near Bratislava, from which we serve 12 countries, including Hungary. This significantly improves availability as we can deliver faster and from a much wider stock than before.

I assume more shelves are needed also for all-season tires.

Demand for all-season tires is real and legitimate from the side of end-users. For those who drive relatively little – especially, but not only in metropolitan areas – and who even put aside their cars in extreme winter conditions, there is an understandable expectation that they will not want to change tires twice a year, using two different sets. During the pandemic, growth in demand has accelerated in this segment, which we expect will continue, as there are relatively many for whom this is the right choice. In recent years, we have also expanded our offer.

Tire manufacturing is perhaps one of the most globalized businesses. Does this also mean that a German car factory is not automatically served by a German tire supplier? How open is the competition?

It’s been like this for a while. Car manufacturers have been under enormous cost pressure for a long time and the nationality of a particular supplier has very little, if any, role in the decision making. Pure business considerations apply to procurement. In many cases, our share is lower at German manufacturers that at non-German companies. It is uncommon for car factories to choose a supplier based on nationality, they are much more profit-oriented and rational.

According to press reports, Continental has taken a major step towards sustainability, by developing a technology that allows the recycling of used PET bottles. What exactly is it?

We want to be the most progressive tire company in being environmentally and socially responsible. As part of this ambition, we have reached an essential milestone and I am personally very pleased that we have made a serious step towards improved sustainability: our first products containing recycled PET bottles are entering volume production.

You call this technology ContiRe.Tex. What does the Tex mean?

‘Tex’ stands for textile, in this case high quality polyester yarn recycled from polyethylene terephthalate (PET), which would otherwise end up in incinerators, oceans or landfills. The yarn is produced mechanically without any intermediate chemical steps. This process involves the manual separation of the bottles and caps, followed by mechanical cleaning and shredding, and processing into plastic granules, which are finally spun to become polyester yarn used in sustainable tire production. A set of standard passenger car tires uses 40 recycled PET bottles (9 to 15 PET bottles per tire, depending on size). We are also striving to make production, use and recycling more energy efficient and environmentally friendly, bringing Continental one step closer to tires made from 100% recycled or sustainable materials.

This is an ambitious goal.

We are determined to use only raw materials from recycled or sustainable sources by 2050 at the latest. It’s a long journey, but we are already on our way.

After graduating as an economist, Mr. Vilmos Tokaji became acquainted with the world of automotive after sales during his 8 years at Porsche Hungaria. He joined the Hungarian sales organization of Continental’s tire division in 2010, where he played a significant role in the development and implementation of the local market strategy as the sales manager responsible for passenger car and light truck tires. In 2020 Mr. Tokaji became the Sales Director for the newly established Southeast Europe region, which now includes 11 countries.

He believes in the common value-creating power of long-term, even decades-long business partnerships. He is convinced that although “change has never happened this fast before, and it will never be this slow again”, crises are always followed by consolidation and the role of cooperation in business is not diminishing. Mr. Tokaji wishes to contribute personally to making safe individual mobility accessible to as many people in our region as possible. He believes that the business of the future can only be sustainable, and in the foreseeable future with widespread cooperation it is possible to organize road transport in a way that also enables the conservation of our natural resources.

*As an opening part of the series of interviews, we published a conversation with the President of the Association, Péter Morenth: https://hta.org.hu/megkerulhetetlen-tenyezove-kivanunk-
valni/
Szabolcs Hunyadi, Sales Manager of the Hungarian Business Unit of Bridgestone Europe NV / SA, shared the following thoughts: https://hta.org.hu/a-tarsadalmi-felelossegvallalas-legalabb-
olyan-fontos-mint-a-profit/
Our interview with TamásBakonyi, Managing Director of Apollo Vredestein (Hungary) Sales Kft. is available on the following link: https://hta.org.hu/bakonyi-tamas-mindket-markank-
sikeres/